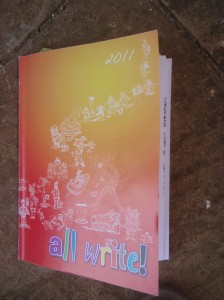 This was a writing workshop with 90 children, split into three mixed-age groups, half Year 6 (10 and 11 year olds) and half Year 1 (5 and 6 year olds).  The theme of the workshop was ‘listening’ and the children started by writing continuously for about three minutes, listing all the sounds they could hear in the classroom.  The children with the longest lists then read what they’d written to the class, and I wrote up their list on large sheets of paper stuck to the front of the classroom. 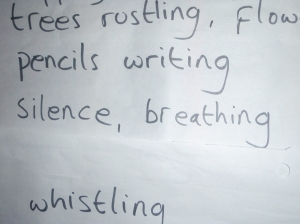 Then the children were asked to ‘stretch their ears’ further and to see if they could hear other sounds, beyond the classroom, beyond the next room, outside the school, and even beyond. 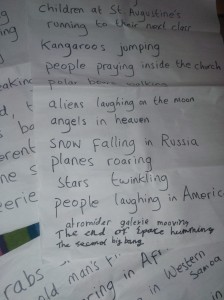 We carried on this exercise until the children started to suggest sounds they couldn’t physically hear but could imagine.  Then they stretched their ears further and further.  By the end of the three sessions, I had several sheets of paper with all the sounds they’d heard, some real, some imagined. 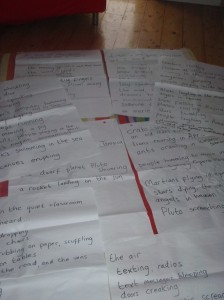 The lines were then shaped into a poem which was entered in Manchester Metropolitan University’s AllWrite Competition and selected to be published in the AllWrite anthology 2011.  If you click on the images below you will be able to read the complete poem. 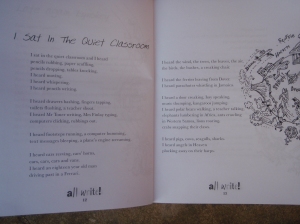 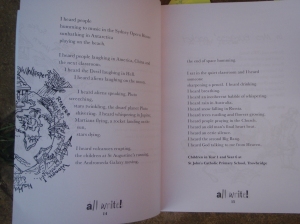 The children were thrilled to see their work in print.   With my help a group of about 20 children also performed their poem, using a microphone, during a special assembly.  I was delighted to learn that since my workshops, children are now writing poems regularly in class and submitting their work to other competitions.  Watch this space!

3 thoughts on “Writer in School: I sat in the quiet classroom and I heard……”