Three missing poems but no lost days because that was when I spread four years worth of poems across my sitting room floor and began to dare to believe that I might have enough poems strong enough to submit to a pamphlet competition.  The extra poetry discipline has been very helpful; NaPoWriMo has added focus to my daily writing routine.  And it’s been good fun, to boot.

I’ve already re-blogged Robin Houghton’s terrific account of George Szirtes’ workshop but I must share with you the best warm-up exercise I’ve ever done, which was to write 100 words (prose) about ourselves, not CV-type details, George said, but something to give a flavour of who we were, and (this was the most exciting bit!) one lie was compulsory.  Then we read out our mini-biographies to the group who had to guess the lie.  A fluent French speaker, a cat called Colin, and a journey up Mount Everest all gave the game away but other lies were trickier to discover!  Needless to say, the most convincing liars received suspicious glances for the rest of the day (only joking, since I was one of them. Or was I ?!)

Anyway, here is a rough, first draft of a poem I wrote at the workshop.  This came about from another exercise which was to quickly chat to the person sitting next to me – it was Robin! – and to find out some details about someone they knew, then to re-appropriate that person by writing them into a poem.  Robin’s person had been a boy chorister at Coventry Cathedral, who achieved his ambition of wanting to be an organ master, which required acquiring a suitable car, and is now a choir leader and very kind to older members of the congregation.

After the bombs they sent him to Coventry
to sing, but he longed for a car
capacious enough for his German organ.
Now the ladies bring cakes
and he sends hymns
of abstract nouns to the rafters;
sorrow, pain, doubt.

I’m not sure I’ll do anything with this and I apologise to Robin if it’s a tad smutty. You gave me the raw material, Robin!!

The second workshop I attended this weekend was Jo Bell‘s brilliant Treasure Trove Workshop at Wiltshire Museum, Devizes which combined writing with looking in detail at some of the beautiful and fascinating artefacts on display.  It was a kind of ‘walkabout-shop’ rather than a traditional workshop. I loved this.  Jo’s background is in Archaeology and David, the Director of the Museum, was also on-hand to supply dates and facts and speculations about things.  What things, you ask? Things such as a small, jade axe-head dating from 3,500 BC, identified as originating from a place mind-bogglingly high up in the Italian Alps; daggers (many daggers, and most showing little sign of use – what was the significance of daggers? we wondered); a gold lozenge made by someone who clearly understood geometry, David said – what was it for? And there were other treasures for us to write about; vessels, pots, jewellery, stones.

This is the second of Jo’s workshops I’ve been to and she carries in her brain a deep, deep well of writing exercises and prompts to trigger ideas for poems. She also seems to have an encyclopaedic knowledge of poems and is able to select perfect poems for participants to read at each workshop. Here are some of the poems we read today, I’ve added links where I can:

Another refreshingly different workshop from Jo. I can’t wait to find out what she’ll think up next. Here is a rough, first draft of one of the poems I wrote today; a poem, from Jo’s exercise centred on Kathleen Jamie’s poem, about my own burial.

Bury me in my bed
And always drink tea at dawn
In my memory. Iron my bedlinen
Leave on my specs
Weave a rollerball pen
In and out of my fingers

That’s all for now. Two wonderful workshops, a little behind with my poem count but I’m not complaining. Wishing you many poems in the final week of NaPoWriMo! 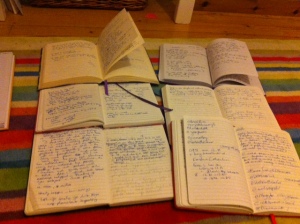 8 thoughts on “NaPoWriMo: 21 days and a brace of workshops”