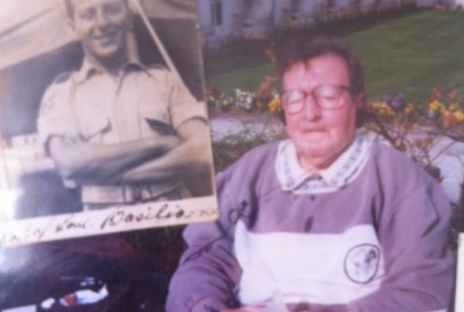 This week’s photo challenge, ‘Humanity‘,  is a chance to tell you about my Dad, Basil Patrick Dominic Corcoran (1923 – 1992), who showed me how to be a human, who left school at 14 to be a butcher’s delivery boy, who fell off the too-big delivery bike, who mixed up the paper-wrapped meat parcels, who delivered the wrong sausages and chops to the wrong houses, who got shouted at, who chucked the heavy bike into the river to show them, who got the sack, who worked as a gas fitter, who served in WWII, who fell in love with my mother, who sent her his smiling picture from Italy in 1944 signed “lots of love Basilio xxx”, who educated himself by reading books and The Guardian newspaper, and listening to the BBC World Service, who knew Latin from going to Mass, who was a champion boxer in his army regiment, who developed some kind of polio-like illness in the 1950s which left him paralysed, who lay flat on his back unable to move in Walton Hospital in Liverpool for six months, and then woke up finding he could wriggle his toes, who walked with sticks until he needed a wheelchair, who was a dangerous driver in his electric wheelchair, who smoked and drank too much, who I never heard speak badly of anyone, who had nine children, who taught me to always think of the other person’s point of view, who spoke up when something was wrong, unfair, or unjust, who developed Parkinson’s Disease in later life, who laughed at the absurdity of his tremor, who spilled whisky and cigarette ash everywhere, who liked Toblerone chocolate, who poured whisky into his morning coffee in his spill-proof beaker, who became blind in one eye and lost most of his vision in the other, who still insisted on driving his electric wheelchair, who laughed at people jumping out of his way, who was good at jokes, who had an infectious laugh, who had a leg amputated and then asked “How many limbs do I have left?”, who said to me when I told him I had a headache “I’m so lucky, all my life, I’ve never had a headache. What’s it like?”, who was irresponsible, who was hopeless with money, who ran up debts that he expected his children to sort out, who gradually lost the ability to speak, and said “Of all the things I’ve lost in my life, what I miss most is my voice.”, who liked to sit in the sunshine and listen to the radio or audio books, who died two months after this photo was taken, who is someone I think of every day.

12 thoughts on “My Dad showed me how to be human”