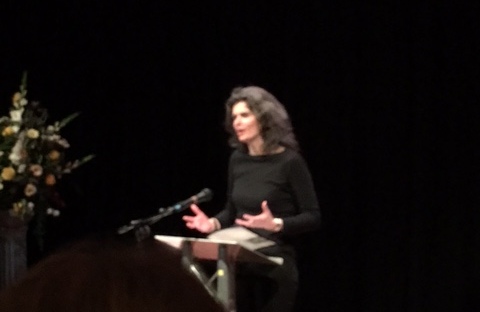 There have been so many outstanding readings at the festival, it would take me until the end of the year to tell you about them in detail.  I’ll write some more when I’m back at home but for now, here are some things poets have said which I’ve liked enough to record in my notebook.

I should also mention that two poems have come to And Other Poems by way of this year’s Winchester Poetry Festival.  The first is ‘Miracle’ by Stephanie Norgate, a new poem which she read at the Chalk Poets Reading on Friday.  Stephanie told the audience that when she was writing about the landscape of the South Downs and the sea, she wanted to write a poem looking outwards, about the miracle of sleeping children and about thinking of others.  The second poem is ‘The songs’ by Choman Hardi, who gave an intensely moving, beautiful reading on Saturday.

Here are some festival snippets:

“The sound of this poem is so important.  I wanted to hold the world together in the sound.”  “In some ways, this poem ‘sounds’ more than it ‘means’.”  (Karen Leeder).

“My fervent hope  is that my book is more intelligent than anything I will say about it.”  “Disinformation occurs in the private sphere as much as the public.” (Frances Leviston)

“It wasn’t until I got to the end (of writing a poem) that the meaning made itself known to me.” (Shazea Quraishi)

“This poem is about what happens when you don’t know what to do anymore… and whether it’s possible to dwell in heartbreak.” (Deryn Rees-Jones) 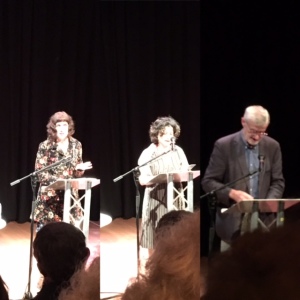 “My father would say “I have that book,” and my mother would remind him, “No, you had that book.” (Choman Hardi)

“Translation raises questions about what is stolen and what is lost.” (Tara Bergin)

“Translation asks all sorts of questions about faithfulness and honesty….. and it is a kind of overhearing.” (Jane Draycott)

Time for another book cover. I first read the poem ‘I am sending you this present’ in Smiths Knoll magazine about 10 years ago and I’ve used it in many workshops. Then I didn’t see much of Connie Bensley’s poems anywhere until I was at The Hurst and found this book in their library, so bought it. Bensley comes from a different background to me (she seems posh) but I know something of her world having spent a big chunk of my twenties working as a temp in London. I admire the way her poems are invested in ordinariness without being boring. And I am glad of her humour. #poetrybookcovers #poetrybooks #poetrybookshelf #bookstagram #bookcover #bookcoverdesign #books #bookcovers #bookcoverart #poetry #poetrycommunity #bookcoversilike #bloodaxebooks #poemsilike #conniebensley #katherinecuthbert