If we were having coffee we’d be drinking tea or wine or hot chocolate because it’s too late in the afternoon to drink coffee.  I’d tell you that I’m carrying a knot of fear and dread around with me that reminds me of when I was a young teenager and I first read about nuclear bombs and what they can do.  I’d tell you that I shared my fears with a friend, Amanda Ransome, who told me, the next day, that she’d talked to her Dad and he’d told her to tell me not to worry because he also used to worry about nuclear war but that was years ago and now he’d grown up to be a man, everything had turned out fine.  He told her to tell me that it was normal to feel frightened about the world when you were young but that everything would turn out to be OK.  After a day or two, I began to feel less scared and began to think that perhaps Amanda’s Dad was right.

Before long I grew older, took some exams, failed most of them, left school, found jobs.  Years later I bumped into Amanda Ransome and we arranged to meet one lunchtime in a pub where we both ate ham and mustard rolls and drank cider.  We didn’t speak about war and I haven’t seen her again.  If we were having coffee (not coffee, etc) I’d tell you I’m thinking about Amanda and wondering how she’s feeling today and wondering if her Dad is still alive and what he’s thinking about if he is. 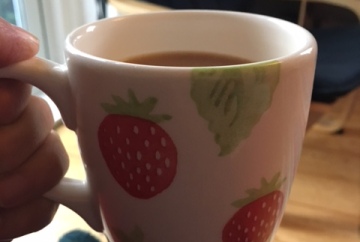 It’s one year to the day since the Paris bombs.  This time last year I was in Suffolk after spending three days at the Aldeburgh Poetry Festival and then five days on a retreat in a 14th manor house in rural Suffolk as one of the Aldeburgh Eight.  The night before we left Suffolk (12th November) I asked my friend Anita if she’d heard about anything happening in Beirut since I’d seen that one of my nieces had posted a picture of a lit candle on their Instagram and the words “Pray for Beirut.”  Nobody seemed to know anything – wifi had been intermittent all week and we’ll all be focusing on our writing.

After saying our goodbyes on Friday lunchtime we travelled our separate ways and news of the Paris attacks came in later that evening.  I remember trying to make sense of what was happening in the world after being on retreat in an enormous, luxurious house, in the remote countryside for eight days.  I remember thinking that if war had broken out at that point we might have been stranded in that house, in our own reality, eight people aged from 25 to 67 trying to get better at writing, with our two tutors, Jackie and Peter, and Maggie, who cooked all our meals for us.  In some ways, we had been in a totally different reality to everyone else all the time we were on retreat.  We were living a kind of dream which is how it feels we’re living now, those of us privileged enough to be living without direct threat of war or invasion.

If we were having coffee I’d say “You have coffee if you want to, but it’s too late for me.”  I’d ask you to stay for dinner.  I’d tell you you’d be welcome to stay the night because our futons are so comfortable and we have lots of spare bed linen.  I’d say, “Should we drink wine to make ourselves feel better or is that a type of running away?”  Would we watch the news to try to keep up to date with new developments or would we watch a film?  I’d tell you to keep in touch.  I’d tell you to let me know if you heard anything or if you knew what to do.  I’d ask you if you’d ever heard about what had become of Amanda Ransome.

Thank you to Diana for hosting this #weekendcoffeeshare, the first time I’ve ever participated.  Read Diana’s post here, read more posts here and find out how to join in here.

4 thoughts on “If we were having coffee…. 13 November”