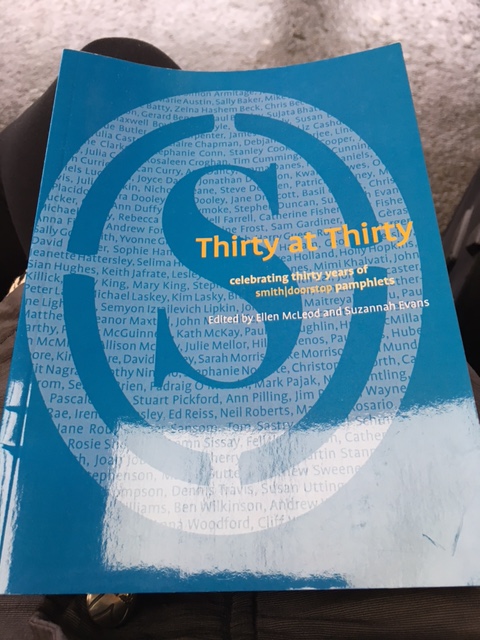 …and other thoughts about being away from home.

I’m just back from three nights away in Sheffield where I met up with all but one of my Aldeburgh Eight friends.  We’ve been trying to meet up again for some time and we managed to arrange to converge in Sheffield for one of the famous Writing Days at The Poetry Business, so that we could also see Peter Sansom who was one of our tutors for the Advanced Poetry Seminar in Aldeburgh.

As luck would have it, on Friday night, there was a celebration at the base in Bank Street, Sheffield, to mark thirty years of The Poetry Business  and a launch of Thirty at Thirty,  a super selection of thirty poems published by Smith|Doorstop from 1986 to 2016. 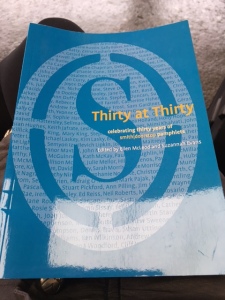 I read a poem by Allison McVety, and two other Aldeburgh Eights, Kathy Pimlott and Suzannah Evans, read poems by Mimi Khalvati and Stephen Knight respectively.

It was an incredibly friendly, cheerful, welcoming, inclusive evening and the first of many times over the weekend when I was acutely aware of how warm and kind everyone was to me, in cold contrast to how people who have left their home are being treated in other places.  I’m not just talking about Donald Trump’s Executive Order banning entry to the USA from citizens of Iran, Iraq, Libya, Somalia, Sudan, Syria and Yemen, predominantly Muslim countries.  This is clearly shockingly wrong, and I am in solidarity with people who have protested against this unjust legislation, but I have had call to remind myself, especially while I’ve been a traveller away from home, that there are many other situations, including here in the UK, which also reflect badly on the way we treat our fellow human beings and which we should consider doing something about.

Muslim lives, the lives of Black and Brown people, the lives of migrants are under attack in the UK too. Many in these communities are fighting for survival amid racist policing and surveillance, gentrification, violence in prison and mental health institutions.

I realise that I’m mixing up politics and my weekend away and Sheffield and The Poetry Business and the Aldeburgh Eight all in one blog post which is probably rather messy but it’s becoming increasingly difficult to write in a sealed chamber with  no regard to what’s happening on the other side of our closed doors, isn’t it?

The writing day was as brilliant as people say it is

But I haven’t said anything about the Writing Day itself on Saturday which was as fantastic as people often make it out to be.  I’ve been to many, many workshops but I’ve never been to one as busy as this one!  On another day, in another mood, I might have changed my mind about remaining at a writing workshop where participants nestle close – *very* close – to one another on either side of long tables but there is something gloriously no-nonsense about Ann and Peter Sansom’s approach.  They create an atmosphere in which everyone is welcome, you feel that nobody would be turned away, however full the room became.  You get the feeling that more tables and chairs would be added and added and that people would be allowed to spill out into another room, or rooms, if necessary.  There is an attitude of “here are the writing prompts: write some poems!”

And we wrote and wrote and wrote.  I lost count of the prompts and ideas.  It was liberating and encouraging and fun.  I have no idea if I’ve written anything that I’ll be able to call a poem – actually, that’s not true, I think I might have at least one poem already – and I certainly have some beginnings of poems.

In the afternoon, after a rushed sandwich, the large group was split into two smaller groups, one with Ann and one with Peter, and we read and gave feedback on a poem that we’d brought with us.  Not everyone from the morning stayed for this, so the groups were more manageable.  As is often the case, I felt that people’s comments to me were far more useful than anything I said to anyone else.  I wouldn’t say that giving on the spot feedback is my forte.  This was the first time that I’d been in a group with Ann and I found her feedback extremely helpful, about my own poem and other people’s.  She is skillful at reading poems quickly and suggesting more successful linebreaks and word changes and other suggestions.  In all, it was quite a brilliant day, made even better by being among friends and people who were kind and caring.  I really wish that this could be the bar the world set for treating others.

4 thoughts on “A visit to The Poetry Business in Sheffield”