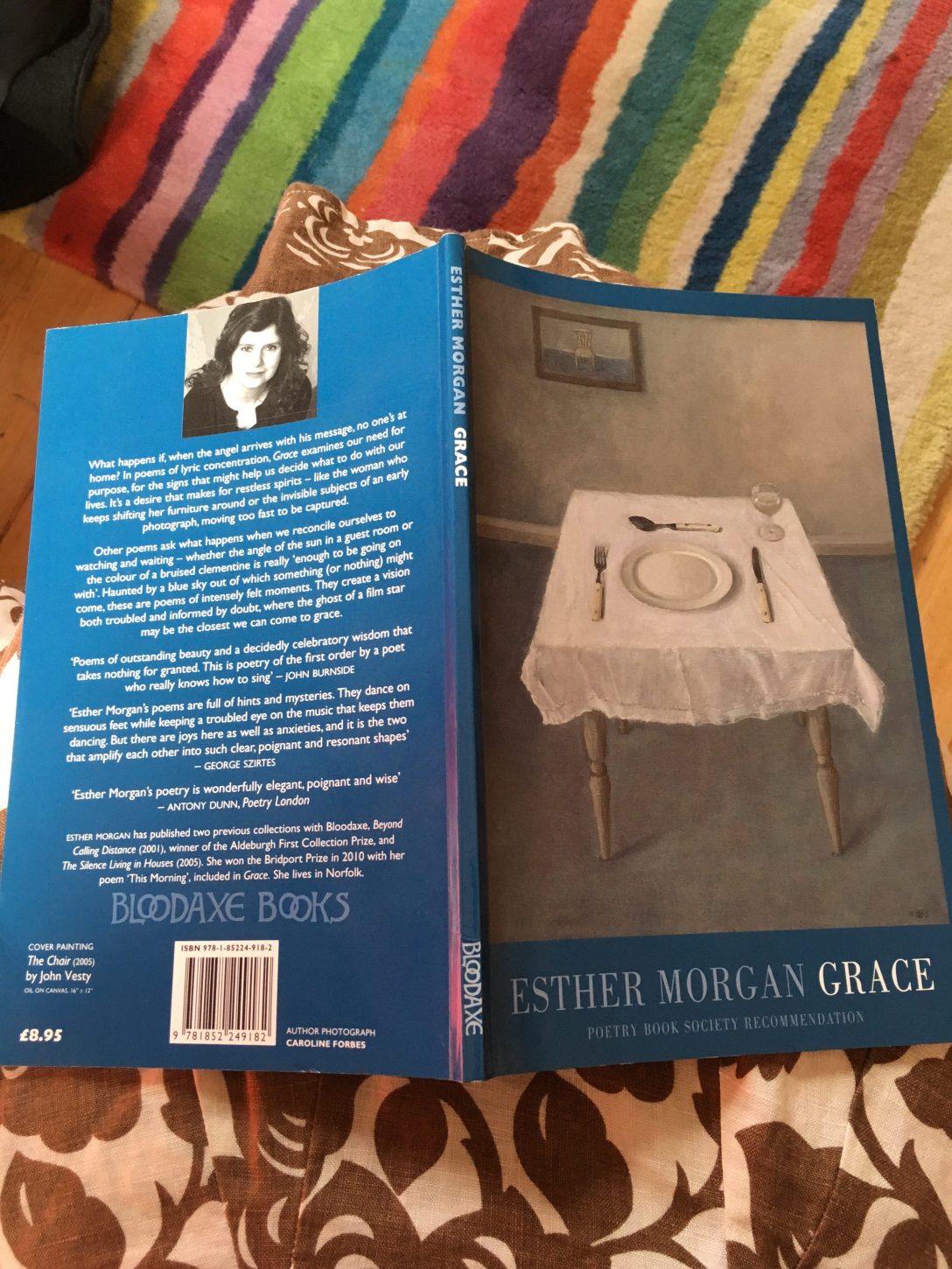 I enjoy browsing through poetry books on the look out for poems that I think will work well in a workshop.  As I mentioned before, the theme for National Poetry Day this year is ‘Freedom’ so I’ve been looking for suitable poems to take into St Gregory’s Catholic College where I’m working as Writer in Residence.  I found two good ones in Esther Morgan’s 2011 Bloodaxe book Grace. They are As I Walked Out and The Long Holidays (see below).

Something I’ve noticed about working with novice poets is their fondness for using ‘poetic language’ in their poems.  Grass has a tendency to be “emerald green”, the sea often “shimmers magically”, “clouds drift softly,” and so on.   Sometimes this kind of writing spoils my enjoyment as a reader, firstly because I’ve read those phrases many times before and, secondly, because I sense that writers are trying to conform to their idea of how a poem should be, rather than trying to convey what they really mean.

I think this is inevitable if a writer hasn’t read much modern poetry.  For this reason, I always bring lots of poems (by many different writers) into my workshops, so that participants have the chance to bring themselves up to date (to some extent) with what is currently being published.  In this way, new writers are offered more options and ideas about how they might go about writing a poem.

Esther Morgan uses simple, clear language so she is good poet to read if I find myself indulging in too much magical shimmering, and she’s a good poet to share with others who find themselves softly drifting a bit too fluffily.

In the two poems chosen here, adjectives and adverbs are sparse (can you spot any?).  The Long Holidays has no punctuation other than one capital letter at the beginning, one full stop at the end of the poem, and one dash on the first line.  It is a short poem, only seven lines long, so an extremely portable poem to carry into workshops.

I shared The Long Holidays with students aged 11 – 14 and it is no exaggeration to say that several faces lit up when they saw that it is possible to write a poem with hardly any punctuation!  They were fascinated by the line-breaks and the unequal length of lines.  We read the poem aloud several times (another advantage of using a short poem) and experimented with saying the poem in one breath or pausing at line ends.  We talked about using the space at the end of a line and stanza breaks as kinds of punctuation.

Other ways to use this poem would be to blank out the title or blank out sections of each line and invite students to speculate about the missing words.  With one group, students read the poem a few times and then tried to recite it from memory.  This made us pay attention to every word and listen to the poem’s rhythm.

We talked about the mood of the poem, how it made us feel, how we thought the poet was feeling, what it was about.  After a short discussion, students wrote their own versions of the poem, stealing the first line, if they wanted to, and trying to include one simile on the final line.

I shared some of my attempts with the group, included below:

As I Walked Out is another Esther Morgan poem that’s worked well in workshops this week.

Don’t forget there are more poems around the theme of ‘Freedom’ on the National Poetry Day website.  I think my favourite is Sophie Herxheimer’s  Of course I am Maid Marian, Who else is there to be? Which is your favourite?  Do you have other  ‘Freedom’ poems to recommend?