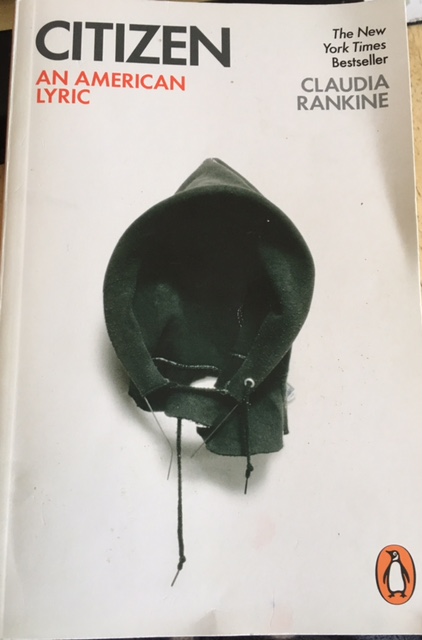 I wanted to jot down some thoughts while they’re still fresh in my head after hearing Claudia Rankine in conversation with David Olusoga in Bristol last Friday.

The evening started with David Olusoga telling Claudia Rankine that  Citizen, Rankine’s book of lyrical essays, fragments, and images of artwork, is like no other poetry book he’s ever read.  What is Citizen? Olusoga asked.  Rankine answered that she thinks of Citizen as a “community document” a “bringing together of voices”.

Rankine said that  she was motivated to write the book when she observed the (delayed) official response to Hurricane Katrina, and how it was reported, and the book grew from there.  It contains many accounts of racism, from a black person not being noticed in a shopping queue, from white people choosing not to sit next to a black person on a train or a plane, from white people calling the police because a black person was outside their house, and many, many other such microagressions.  As well as Katrina, the book also recounts, for example, the way Serena Williams has been treated and spoken about by the mainstream media; the 2006 Football World Cup Final when Zinedine Zidane headbutted Marco Materazzi; and incidents of violence by white police officers on black males.

There is no first person narrator,  ‘I’, in Citizen, the writer addresses a (third person? fourth person?) ‘you’ and the distance that this creates shines a clear light on what ‘racism’ is.  The discussion between Claudia Rankine and David Olusoga centred around racism, appropriately, and how Rankine’s work engages with racism.  It’s easy to bandy the word ‘racism’ about without truthfully attempting to understand what it is and what it does to the worlds we live in.  Even if white people believe they are not racist – as I believe I am not – it is still necessary to acknowledge that racism exists in our society and institutions and therefore impacts our lives, our upbringing, our education, and all of us, whatever colour we are.  If we are white, it is likely that we will have benefited from white privilege.  If we are not white, it is likely that we will have experienced racism.

It was brought home to me that acknowledging white privilege is important when, on Friday, Claudia Rankine acknowledged her own educational,and financial, privilege.  This really stood out for me because  I cannot think of any speaker I’ve been to see who has expressly stated their privilege in this way.   Rankine made a point of mentioning her privileged background, telling the audience that she’d been to private schools and Ivy League universities.  This acknowledgement contextualised everything else that Rankine said.  For one thing, the writer isn’t exclusively, if at all, writing about personal experience, but her privileged education has afforded her  a platform from which to speak and from which to bring into scrutiny the experiences of many others.

Rankine’s acknowledgement made me think of conversations I’ve been involved in, on many occasions, about what white privilege is and about whether one kind of privilege cancels out another privilege.  Citizen, I think, answers this question.  Claudia Rankine, who has experienced a more privileged education than me, and who is, I would imagine, more privileged in terms of household income than me, will have experienced, and will experience, racism in everyday life in a way that I have not, and will not.

In talking about this on Friday, Rankine discussed activism and using a platform to resist racism.  The writer discussed how powerful the Black Lives Matter movement has been in pushing against institutional racism and she talked about NFL player Colin Kaepernick’s Know Your Rights Campaign.  She mentioned, more than a few times, about how disappointed she is that basketball player Michael Jordan hasn’t done anything political.

Rankine also talked about the need for white people to speak out, act, listen, and support people of colour, particularly in movements campaigning for justice or demonstrating about injustice.  She talked about the Women’s March and said “Imagine what a message that would’ve been if they had shown up in Ferguson.” 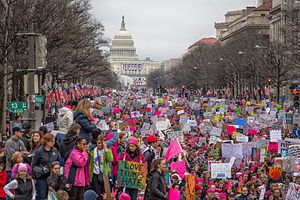 Claudia Rankine also talked about ‘whiteness’ and about her work establishing The Racial Imaginary Institute.  “White people think of themselves as people, not white people,” Rankine said.  She urged people to submit their work to the Institute.

Rankine also talked about the line from Citizen that has been widely quoted:

The writer said that at readings, audience members had pointed out that the line should be “Because white men and women can’t police their imagination/ black men and women are dying.”   Rankine thanked those who’d made this correction for her – which proves her own statement that the “community document” is still evolving.

Something else that stayed with me after hearing Rankine read was that she said that, at readings, Asian and Arab women were always silent, but that many had come up to her afterwards and told her that the stories and incidents in Citizen had happened to them, and spoke to them.  “I wasn’t thinking of those women when I wrote this book,” Rankine said, proving that what we write and do has impact beyond what we first imagine.

Forgive my sometimes jumbled thoughts.  I wanted to set something down here and might return to amend this post.

9 thoughts on “Claudia Rankine in conversation in Bristol”