I originally wrote this post four years ago, the day before my oldest child took her first public exams.  That same child is now in her second year at university and the second one is about to leave for university in September.  I thought I’d share the post again as it’s GCSE Results Day here in England (not sure about Wales, Scotland and N. Ireland) and I’m thinking about exams, results and how we define ourselves and others.

Twenty-four hours before my oldest child receives her GCSE results, it’s hard not to relive the day the game was up for me.   One thing I’ve learned about being a parent is that  it’s impossible not to revisit my own past as my children grow older. 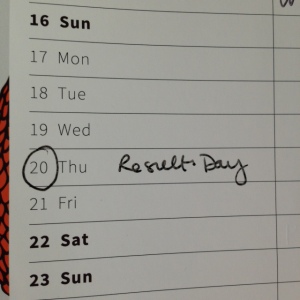 Until my ‘O’ Level (as these exams were called in my day) results arrived, to the outside world, I was a quiet, mousey, serious teenager, probably destined for ‘A’ Levels, university and a professional career. In class, my creative writing was read out to other students as an example of excellence. One of my English teachers once triple-underlined the opening sentence of one of my short stories and said “My God, that’s good.”

In class discussions about politics, current affairs and religion, I could be relied upon to have an opinion, to put across the underdog’s point of view and argue for social justice. I watched news programmes and Party Political Broadcasts and harboured the thought of a career in that realm, or in journalism. As well as this, I might be a writer, I thought.

My teachers, generally, knew my grades and, undoubtedly, knew that I wasn’t destined for academic success but that never stopped me from dreaming and planning my adult life. Among friends, I shared my ambitions and dreams, knowing that I wasn’t on target to receive high exam results but believing that my passion and strong beliefs would see me through. Somehow.

Everything changed when the envelope containing my exam results landed on my doormat. The results were no worse than I’d expected. I’d passed in five subjects and I’d failed Maths. I felt like the same person: a sixteen year old girl who liked reading and writing, going to the cinema, watching television, talking about current affairs. What changed was how other people interacted with me.

Rather than ask which book I was reading, which film I liked, what I thought about a TV programme, my friends asked about my grades. Meeting new people, going for a Saturday job, talking to new teachers in the Sixth Form, the question was the same. “How many subjects? What were your grades?” When I told them my results, it seemed to me that people were making judgements and assessments about me, about what I was capable of. Was I imagining it or were people speaking to me as if I was a bit stupid?

People who’d previously sought me out in a discussion now seemed to look away while I was speaking. Was it my imagination or were they no longer interested in what I thought about anything?

I made it into the Sixth Form and started studying for ‘A’ Levels in English Literature, History and Religious Studies. I found the work difficult and I began to wonder if I was making a mistake. What if I spent two years studying and ended up failing them all? Clearly, I wasn’t good at passing exams, in fact I wasn’t clever at all. Wouldn’t it be better to leave school and look for a job?

There were other complications in my life, which I won’t go into now, but after two terms in the Sixth Form, full of self-doubt, with no confidence and low self-esteem, I did, indeed, leave school and start work. And, actually, it wasn’t a complete disaster at all, in fact I had some incredibly exciting and joyful times and made many new friends and achieved all sorts of successes to do with making a living and creating a home for myself.  And I quietly continued to educate myself by acquiring skills, continuing to read, learning languages and engaging with cultural pursuits.

But it wasn’t until I was 30, and finally a student at university, that I re-connected with my sixteen year old, pre-Results Day self and re-ignited my passion for reading and writing. It took me fourteen years to remember what was really important to me. I haven’t had a glittering career but I did enjoy some of the happiest days of my life at uni, not least because I met a wonderful friend who became my husband.  And I’m not a journalist but I do enjoy a bit of blogging and I’m not a politician but I do try to add politics to my poetry from time to time – two subdued interests given a second chance.

But back to Results Day and its associated memories looming large again.  My only wish for my daughter, and for anyone waiting for their results, is that they hold on to who they are and to what’s important to them. Don’t allow what’s written inside a sealed envelope change any of that.  This is what I would have said to my sixteen year old self.   And another thing: it’s likely that some people did react to me differently once they knew my exam results but it’s equally likely that there were plenty of people who didn’t judge me and who treated me the same.  I wish now that I’d sought those people out, that I’d brushed off other people’s prejudice and stayed true to myself and to what I wanted to do.

For now, though, I’m off to do some baking.  Regardless of what the results are, we’re eating cake tomorrow.

2 thoughts on “The Day before GCSE Results Day”