If you want to see real anger, read some of the comments in response to Rhiannon Lucy Cosslett’s Guardian piece Art, aura and the doomed search for the perfect selfie.  Although Cosslett writes that she has discovered that “even to suggest that to look at a painting through a phone is a lesser form of engagement provokes ire,” the ire in the comments section is exclusively aimed at people who view art in museums through the lens of their mobile phones. 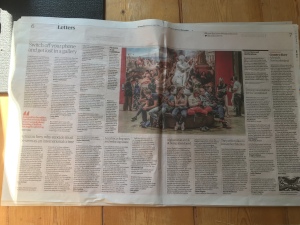 The Guardian published six letters (in its print edition) on Saturday, 24 August, all agreeing with Rhiannon Lucy Cosslett that ‘selfie culture’ in art museums is a problem, and that, like Cosslett’s experience viewing the Van Gogh exhibition at Tate Britain, their pleasure at seeing great art has been ruined by people taking photos on their phones.

I hate to see people unhappy but I  wonder what is really at the root of so much annoyance?  If other people are in your way so that your view is restricted – of course that is irritating.  But isn’t that to do with the size of the crowd rather than what the crowd are doing?  Would  Cosslett have written her article if she’d been at the Van Gogh show with only one phone-wielding  person? And, if that was the case,  what would that say about Cosslett and the many who agree with her?  Maybe that they are more interested in observing how someone else is interacting with art than they are in engaging with the pictures themselves?  Because it seems to me that this is what people are criticising – other people’s behaviour – which doesn’t conform to some perceived acceptable – and superior – norm.

Cosslett and her supporters seem to firmly believe that people looking at art through their phones are missing out – that they would gain more from the experience if they switched off their phones.   The picture painted (pun alert) is one of people spending every waking hour holding a phone in front of their faces.  But if you observe most phone usage at an art exhibition, it usually involves some looking down, looking around, looking at other visitors, looking at exhibits, lifting up the phone, putting down the phone, re-arranging the phone, carrying the phone, and so on.  Why the need to exaggerate?

And why do the detractors feel it’s acceptable to comment on and criticise the way that other people engage with art?  Why aren’t they focused on the art themselves?   I often lose myself inside the act of looking when I’m at an exhibition, so that I hardly notice people around me at all.  If someone stepped in front of me with a phone – yes, that would be bothersome but I wouldn’t go to an exhibition that was going to be so crowded (last day of the Van Gogh show? What was Cosslett expecting?) but if it was the only day available, I would go prepared to be tolerant.

I know that the comments section of any opinion piece comes with its own hazard-warning, so I’m not taking it all completely seriously.  However while I was there I saw an awful lot of lashing out at phone culture and selfie culture in general, and an opportunity for folk to express their  unhappiness with other people being on their phones the whole time.

I am trying to understand why this bothers some people so much and I think it might have more to do with those feeling bothered than those having fun with their gadgets. Possibly?

8 thoughts on “Hating on Phone Culture”