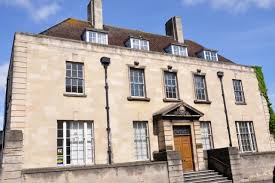 Trowbridge Stanza is looking forward to welcoming poets Anthony Wilson and Dawn Gorman to read at Drawing Projects UK, Bridge House, Trowbridge, on Saturday, 7 December 2-4pm.  Everyone is welcome to attend and audience members are invited to bring one or two of their own poems to read at the open-mic.  Tickets are £5 on the door. 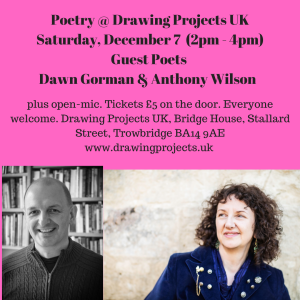 Anthony Wilson works in teacher and medical education at the University of Exeter. He is the author of Lifesaving Poems (Bloodaxe, 2015) and Love for Now (Impress Books, 2012), a memoir of cancer. He has recently published Deck Shoes (Impress Books), a book of enthusiasms and influences, and The Afterlife (Worple Press), his fifth collection of poems.

Dawn Gorman devises and runs community arts events, including the monthly reading series Words & Ears in Bradford on Avon. She works closely with other writers, artists, photographers, film-makers and musicians: in collaboration with sculptor Liz Watts she has been a poet-in-residence at Edinburgh Fringe and in numerous art galleries across the UK, while her collaborative film poems (with Helen Dewbery, Oliver Brown & Daniel Thomason, and others) have been shown at festivals on four continents, including at Cannes Short Film Festival. Her new pamphlet, Instead, Let Us Say (Dempsey & Windle) won the Brian Dempsey Memorial Prize 2019, while her previous one, This Meeting of Tracks, published in the four-poet book Mend & Hone, was nominated in the US for the Pushcart Prize.