It’s about six months since, working for The Reader Organisation, I set up four, weekly, read aloud, shared reading groups for people with dementia (or other illnesses affecting their memory) and their carers.  Three of the four groups, at libraries  in Warminster, Mere and Pewsey, are still up and running, but I’ve moved the fourth group from Purton Library to Royal Wootton Bassett Library because I wasn’t able to recruit enough regular group members.  (Dates, times and addresses of all the groups in Wiltshire can be found here)

Reaching people with memory loss and their carers has been, and continues to be, my hardest challenge in this job, in spite of support from local carers networks, local branches of The Alzheimer’s Society and Alzheimer’s Support, local magazines, newspapers and BBC radio who have all helped to advertise the groups.  Nevertheless, although numbers are a little lower than I’d like, every group is attended each week and I’m pleased that I’ve managed to recruit ten caring, committed, high-calibre volunteers to work across all four settings.  The vision for this Wiltshire project is for The Reader Organisation to train and support volunteers while funding is in place, so that the groups have a chance of continuing into the future.

Aside from recruiting to the groups, the shared reading sessions themselves are developing well and are often moving, joyful, interesting and enjoyable occasions for everyone involved.  I’ve shifted towards reading more poetry and less prose with most groups – although each setting is different and I try to choose literature which appeals to the interests and tastes of different people.  Poetry has the advantage of being short, so that reading it aloud, several times and by different groups members, is more manageable.

Recently popular with all of my groups were the eight sonnets which make up ‘Clearances’ by Seamus Heaney, written in memory of his 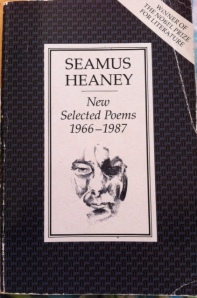 mother.  The poems recall stories and anecdotes from the poet’s life, detailing family histories passed down from his mother and his memories of being with her as a boy and young adult and later as a grown man as she lay on her death bed and in the moments after her death.

Reading these poems provoked much discussion.  Although Heaney was writing about Ireland, many group members, ranging in age from in their sixties to in their early ninties, recalled their own feelings about Catholicism and Protestantism in England when they were growing up.  One man remembered walking past a Catholic Church every day as a child and “knowing that there was something strange there.”  Other members recalled rifts in families when people from different religions married.

Everyone related to Heaney’s description of visiting his grandfather’s house “Polished linoleum shone there.” (Sonnet 2) and we talked about the pleasure of proper tea services, a formally set table and memories of being on best behaviour when visiting older relatives.

Sonnet 3 set us talking about sharing small, intense moments with our loved-ones and how we cherish those times more than big events: “..I was all hers as we peeled potatoes.” And everyone had something to say about bringing in the washing and folding linen that had been drying on a washing line: “But when I took my corners of the linen / And pulled against her, first straight down the hem / And then diagonally, then flapped and shook / The fabric like a sail in a cross-wind, / They made a dried-out undulating thwack.” (Sonnet 5).  We talked about the sensuous pleasures of simple living, and that, although modern gadgets have given us more time, they have deprived us of some of the more enjoyable aspects of daily chores (however most of us, especially the women, agreed that we wouldn’t want to give our gadgets back!).

There was a lot of discussion about the way that acquired knowledge can provoke division in a family and that although parents might aspire for their children to be more educated than they were, the ensuing differences don’t always make family matters straight forward: “With more challenge than pride, she’d tell me, ‘You / Know all them things.’.. (Sonnet 4).

I suppose this sequence of poems was universally popular with my groups because the sonnets deal with subject matter familiar to many people.  We spent one whole session discussing Sonnet 3 which relates the moments when the poet’s mother dies.  Not every person responds verbally as we’re reading and discussing the poems.  Everyone has varying degrees of dementia and some people are not able, or choose not to, speak.  There is no pressure or expectation of anyone to do so.  I try to keep good eye contact while I’m reading aloud so that I can gauge people’s engagement and interest.  Sometimes smiles, nods, sighs (of pleasure or of irritation!) help me understand if people are connecting to the text.

10 thoughts on “Reading with people who have dementia in Wiltshire”

Home in Wiltshire now. Flat and waterlogged! But a beautiful red sky at sunset and a beautiful man to walk by my side #homeagain #home #walking #wiltshire #wiltshirecountryside #rainedalot #muddywalk #redsky