I’m coming to the end of my first term as Writer in Residence at St Gregory’s Catholic College, Bath.  As you know, I’ve been using this blog as a place to document my work there.  Previous posts include Beginning to Write Poetry With Secondary School Students,  Reading and Writing Poems about Where I’m From, National Poetry Day, and Poetry Workshop Ideas (using  the poem The Long Holidays by Esther Morgan).

In recent weeks, students have begun to think about using all five senses in their writing.   An easy way into this, and something I’ve done before when I’ve worked with other groups, is to use an object that all members of the writing group have access to – in this case their school blazer.  Students were challenged to describe their blazer in detail using all five senses.  The St Gregory’s blazer is dark green but students had to come up descriptions that would really bring the object to life.  There have been some excellent examples:

my blazer is as green as a Christmas Tree

as green as an avocado

as green as crocodile skin

Describing how the blazer felt, one student wrote

its lining is as slippery as a snake’s underbelly

the outside is as rough as burnt toast

As the descriptions grew, we discussed what was happening.  Not only were the objects being vividly described, we were also learning something about the person who owned the blazer:

My blazer smells of Charlie’s house

My blazer smells of chicken pie

it smells of my cats

My blazer tastes of the wooden door that it hangs on every evening.

Some students chose to draw their blazers as well. 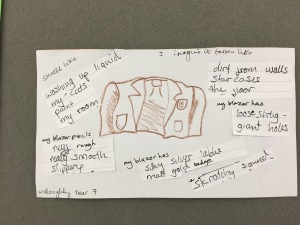 In order to write about the sound a blazer makes, students had to move around, shake their blazers to make the items in their pockets jangle

and they rubbed their sleeves against their ears and brushed the fabric of their blazers with their hands so as to really pay attention to the sounds their blazer could create.

So this led us to think more about sound.  Students know that I’ve written radio plays as well as poetry so they want to try writing some plays of their own.  We began by finding out if we could write down every sound we could hear in the study area where we were sitting, setting the timer for one minute and listing all of the sounds.  We noticed that some people are more observant, or simply hear more, than others.  Also, people hear different sounds.  We compared notes.  Then we tried to imagine what we would be able to hear if we were at a different location in the school – in the reception area, for example. Then we imagined ourselves further and further away, and, finally, students were told they had a super power and could travel to the furthest place they could imagine.  What could they hear?

Again, it was interesting to note how different students’ responses were.  Some young people imagined themselves to the edge of the town or the edge of the country.  Others reached faraway planets and galaxies.

I Sat in the Quiet Classroom, a poem I wrote with mixed aged Primary School, published in the All Write anthology, came out of this exercise.  I wrote about that here.

Next, we read some short extracts from radio scripts.  I wanted students to see how scripts are laid out.  With more time, we will try to listen to radio plays as well.  We read the extracts aloud, with as many students as possible taking on a role. 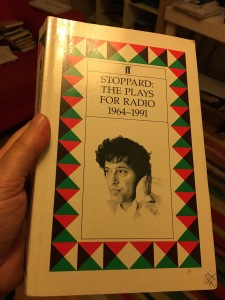 Next, it was time for students to begin to write their own short scripts.  I set out a scenario for two characters – a strict teacher suspects that a student (who always seems to be in trouble) is chewing gum.  What happens?

Students wrote their scripts then acted them out to the group.  I was amazed at how quickly they worked, at how clever and sassy their students were, and how easily duped their teachers were!

This has brought you up to date with what we’ve been doing since September.  My days at St Gregory’s are hard work – I feel like a melted candle by the end of the day! – but I’m thoroughly enjoying working with so many talented writers and artists one day a week.

6 thoughts on “Thinking about sound and other senses. #writerinschool”